U.S. Solar Market Had Its Biggest Quarter Ever 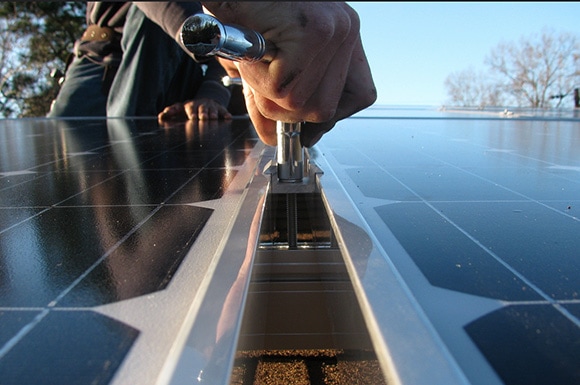 According to the latest U.S. Solar Market Insight report from GTM Research and the Solar Energy Industries Association (SEIA), 4,143 MW of solar PV were installed in the U.S. during Q3’16 – a 99% increase over Q2’16 and a 191% rise over Q3’15. On average, one new megawatt of PV capacity came online every 32 minutes in Q3’16, and the report says the pace is even faster today, as the fourth quarter is expected to surpass the third quarter’s historic total.

“Coming off our largest quarter ever and with an extremely impressive pipeline ahead, it’s safe to say the state of the solar industry here in America is strong,” says Tom Kimbis, SEIA’s interim president. “The solar market now enjoys an economically winning hand that pays off both financially and environmentally, and American taxpayers have noticed. With a 90 percent favorability rating and 209,000-plus jobs, the U.S. solar industry has proven that when you combine smart policies with smart 21st-century technology, consumers and businesses both benefit.”

The report points to an “unprecedented rate of project completion” in the utility-scale segment as a key growth driver. In fact, the utility-scale segment represented 77% of U.S. solar PV installed in the third quarter. Furthermore, GTM Research anticipates that a massive 4.8 GW of utility PV projects will come online in the fourth quarter of this year – that’s more than what was installed across the entire utility PV segment in all of 2015. 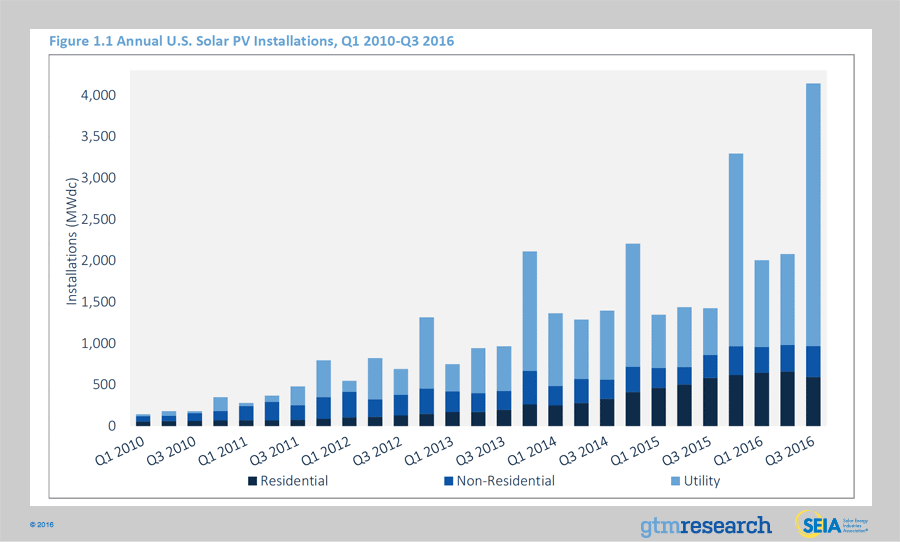 “Driven by a large pipeline of utility PV projects initially procured under the assumption of a 2016 federal [investment tax credit] expiration, the third quarter of 2016 represents the first phase of this massive wave of project completion – a trend that will continue well into the first half of 2017,” says Cory Honeyman, associate director of U.S. solar at GTM Research.

According to the report, the non-residential segment posted its second-largest quarter ever. With 375 MW installed, the segment grew 15% over Q2’16 and 37% annually. The report says part of this growth is attributed to a community solar pipeline that is finally beginning to materialize, and community solar accounted for a record 20% of the non-residential PV market in Q3’16.

Q3’16 marks the sixth consecutive quarter in which more than half-a-gigawatt of residential PV was installed; however, the report notes this segment is experiencing a slowdown from its peak growth quarters. The residential PV segment grew just 2% year-over-year and actually fell 10% from the previous quarter’s total. The report cites changes in the sales cycles in mature state markets, such as California, and challenges posed by rate design reform, such as the elimination of retail net metering in Nevada, as reasons for the shift.