With three solar panels installed for every two Nevadans, Nevada became home to more solar capacity per person than any other state by the end of 2015, according to a new report co-authored by Environment America and Frontier Group. The report ranks last year’s top 10 U.S. solar states per capita, noting that although the leading states are not necessarily the ones with the most sunshine, each one has – or, at least, had – strong public policies to enable homeowners, businesses, communities, and utilities to go solar.

The report says the 10 states – Nevada, Hawaii, California, Arizona, North Carolina, New Jersey, Vermont, New Mexico, Massachusetts, and Colorado – accounted for 88 percent of U.S. solar capacity by the end of 2015 but only 26 percent of the country’s population.

According to the report, of the 10 states, nine have strong interconnection policies; nine have policies that allow critical financing options like third-party power purchase agreements; and all have renewable electricity standards, while eight have specific requirements for solar energy or distributed generation.

However, the report claims that some of the states where solar is flourishing the most are also those where utility interests are attacking it the hardest. For example, the report says nine of the top 10 solar states per capita had strong net energy metering (NEM) policies for rooftop solar at the beginning of 2015, but only seven have retained such strong policies. 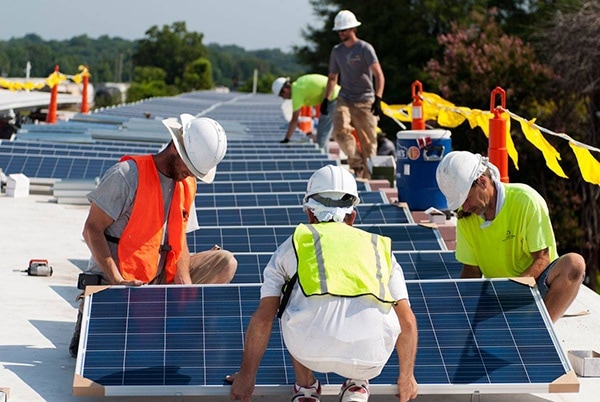 The report says Nevada’s new No. 1 ranking, a jump from third place in 2014, is a reflection of large additions of utility-scale solar power; meanwhile, the state’s rooftop solar industry has taken a step back. After Nevada made its NEM program changes last December at the request of utility NV Energy, the state experienced a whopping 93% decline in rooftop solar applications the following month, according to the report.

In Arizona, one major utility started charging a fee on new solar customers last year, which the report says depressed rooftop solar power growth in the company’s 1 million-person service area; two other utilities in the state are now pressing to institute similar charges and eliminate their retail NEM programs, the report adds.

Bret Fanshaw, solar program coordinator at Environment America and a co-author of the report, says, “Even in the face of strong public support for pollution-free energy, major utilities are working across the country to undermine the policies that have helped states become solar leaders.”

“For the fourth year in a row, our research shows how pro-clean energy policies, not necessarily availability of sunlight, determines which states lead the way on solar,” concludes Gideon Weissman of Frontier Group, report co-author.