The Top 10 Solar Battleground States of 2016

Forty-seven states and the District of Columbia took some form of action on distributed solar policy and rate design changes during 2016, according to N.C. Clean Energy Technology Center’s (NCCETC) latest edition of its “50 States of Solar” report.

The report says a total of 212 state- and utility-level distributed solar policy and rate changes were proposed, pending or enacted last year. NCCETC says this represents an increase in solar policy activity over 2015 when 46 states plus D.C. took approximately 175 actions.

In its report, NCCETC also ranks what it considers the top 10 most active states in 2016 for solar policy developments, as follows:

2. Nevada, where a debate ensued and was eventually resolved over grandfathering in existing net metering customers.

3. Maine, where a net metering successor bill was vetoed and the work toward a new policy was undertaken at the Public Utilities Commission.

5. California, where a net metering successor tariff was adopted early in the year.

6. Massachusetts, where a compromise bill increased the state’s aggregate cap on net metering and made other changes to the state’s solar policy.

7. Florida, where a contentious ballot initiative would have prohibited cross-subsidization due to net metering.

8. Hawaii, where the state’s utilities hit their caps on the new grid-supply option, leaving customer self-supply as the remaining option.

9. New Hampshire, where the Public Utilities Commission initiated the development of a net metering successor tariff following legislation enacted earlier in the year.

10. Colorado, where Xcel Energy’s proposed grid-use charge was dropped in a settlement agreement in favor of time-of-use rates.

“Overall, we saw an increase in solar policy action from 2015 to 2016,” says Autumn Proudlove, lead author of the report and senior policy analyst at NCCETC. “Notably, states considered more specific changes to net metering policies in 2016 and undertook fewer studies related to net metering. Many of these states have already conducted studies by now and are ready to take action.” 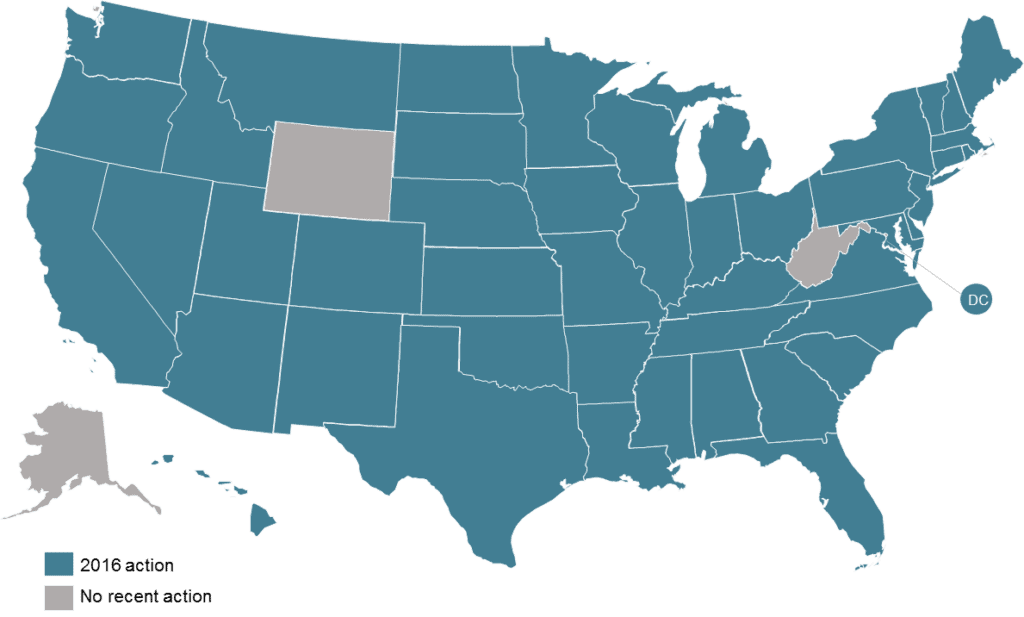 Specifically, the report found the following:

“2016 was very busy year for policymakers and those of us tasked with staying on top of their activity,” comments Brian Lips, energy policy project coordinator at NCCETC. “With several state solar markets hanging in the balance, 2017 is looking like it will be another exciting year.”

More information on the report is available here.