The solar PV industry remained the largest renewable energy employer in 2015, with 2.8 million jobs worldwide – an 11 percent rise over 2014, according to a new report released by the International Renewable Energy Agency (IRENA). The report, titled “Renewable Energy and Jobs – Annual Review 2016,” finds solar employment grew in Japan and the U.S., stabilized in China and decreased in the European Union last year. 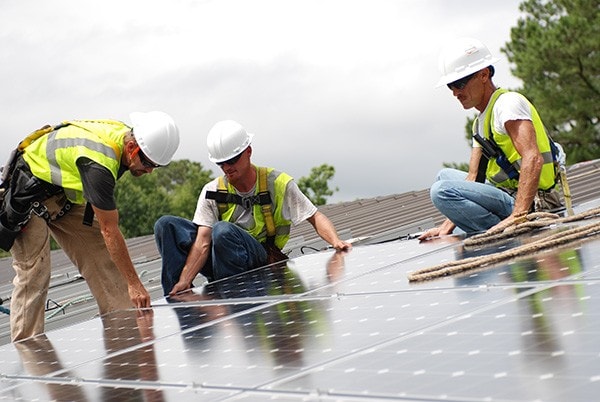 Meanwhile, the entire renewable energy industry employed more than 8.1 million people around the globe in 2015 – a 5 percent increase from 2014. The report says liquid biofuels was the second largest global renewables employer, with 1.7 million jobs, followed by wind power, which grew 5 percent to reach 1.1 million jobs worldwide.

As in previous years, enabling policy frameworks remained a key driver of employment, the report says. National and state auctions in India and Brazil, tax credits in the U.S. and favorable policies in Asia have all contributed to employment increases. 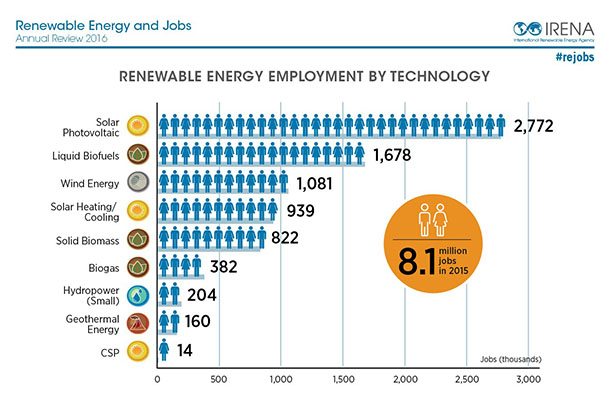 “The continued job growth in the renewable energy sector is significant because it stands in contrast to trends across the energy sector,” says IRENA Director-General Adnan Z. Amin. “This increase is being driven by declining renewable energy technology costs and enabling policy frameworks. We expect this trend to continue as the business case for renewables strengthens and as countries move to achieve their climate targets agreed in Paris.”

According to the report, countries with the most renewable energy jobs in 2015 included China, Brazil, the U.S., India, Japan, and Germany. In the U.S., renewable energy employment increased 6 percent, driven by growth in wind and solar. Solar employment in the country grew 22 percent – 12 times faster than job creation in the U.S. economy – surpassing jobs in oil and gas. Employment in the U.S. wind industry also grew 21 percent.

“As the ongoing energy transition accelerates, growth in renewable energy employment will remain strong,” concludes Amin. “IRENA’s research estimates that doubling the share of renewable energy in the global energy mix by 2030 – enough to meet global climate and development targets – would result in more than 24 million jobs worldwide.”