The Race is on to Make Longer-Lasting Solar Modules

Material innovation is ramping up in solar as the industry aims to address the widespread decrease in performance over time that affects photovoltaic (PV) modules, according to a new report from Lux Research.

The report says solar modules degrade over the years due to environmental factors, causing performance drops and even failures. Such degradation is growing in importance because of its impact on financial models, long-term reliability and adoption in regions with extreme climates.

“New evidence of climate-dependent degradation is creating new opportunities for non-standard material adoption in module packaging,” says Tyler Ogden, Lux Research analyst and lead author of the report. “Recently unveiled module lines from Yingli and BYD use new materials, while other new module assembly designs are likely to be offered over the next five years.” 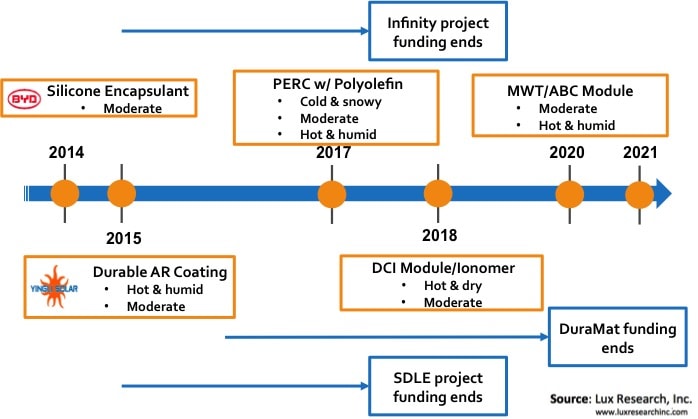 Lux Research says its analysts examined new initiatives to arrest degradation of PV modules and their potential benefits. Key findings include the following:

The report, titled “Extending Lifetime and Performance: Breaking Down the Photovoltaic Module,” is part of the Lux Research Solar Intelligence service.