Off-Grid or Grid-Tied Solar: The Pros and Cons of Each

Now that you have decided to install a solar-energy system at your home or business, the next question is whether to choose off-grid or grid-tied solar. While one setting or the other might sound like the perfect situation in theory, the question as to whether an off- or on-grid solar array makes sense for a specific property can be much more complicated than it appears on paper.

Before we delve into the pros and cons of each type of system, let’s define them. An off-grid system is detached from the power company, and so it is meant to be entirely self-sustaining. A grid-tied system, on the other hand, is still attached to the power grid, which kicks in if the panels are not able to produce enough power due to a number of environmental factors.

Now let’s take a look at the pros and cons of off-grid and grid-tied solar.

Pros: When some people first consider installing solar panels on their properties, their motivation is to live independently from the power company. Off-grid solar is the setup they’re thinking of, as perhaps its greatest draw is that you’ll receive no bill from the power company. This can be especially beneficial in remote locations, where installing traditional power poles requires a huge investment. By installing an off-grid solar system, you don’t have to worry about whether the closest power company can extend its reach out to where you live.

Others choose this option because of energy-consciousness. Put simply, in producing all of your own power supply you can understand exactly how much power you consume in a given day. This method also eliminates the inefficiencies of distribution and allows the user not to feel responsible for the power company’s environmental footprint, for example, as well as their own. In other words, off-grid power represents local sourcing to the extreme.

Cons: If you want power on days where there is no direct sunlight reaching your solar panels, you’ll have to install batteries that kick in when you run out of solar power. Many systems require them, in fact. For some, batteries are a con due to the fact that they can be costly to replace (they typically last five to seven years), and are not particularly environmentally friendly, as many of them have a lead acid base. Batteries also might not produce all the power you need to replace the solar power you lost.*

The other main con to an off-grid system is that you cannot rely on the power company as backup. For example, if you accidentally keep a light on throughout the night and use up all your power, you’re out of luck. So before you choose an off-grid system, make sure you consider whether your property can sustain itself without access to power for periods of time.

Pros: Some—particularly businesses that require a lot of power to operate—see the fact you can rely on the power company when you require additional electricity as the main draw to grid-tied solar. For others, it’s the fact that you can sell power back to the grid. The goal in doing so is to offset the cost of the power you purchased, or simply to sell any excess power you have produced to the power company after you’ve taken what you need within a given time frame (typically monthly). This process is called net metering, where you can save money and potentially even make a bit more. In addition to the financial aspect, some find it an attractive choice because of its benefit to the community as a whole. 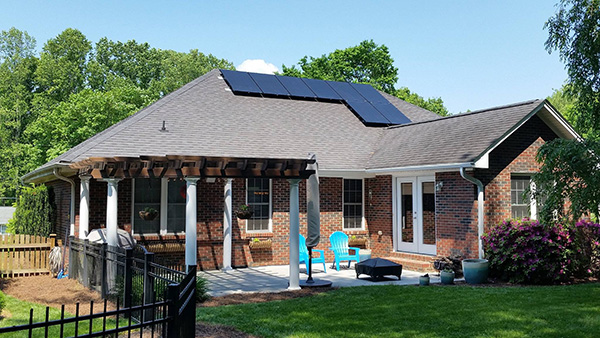 Grid-tied solar often has fewer upfront costs than an off-grid system. For one, it can cost less to install a grid-tied system because it does not require batteries, as off-grid does. For another, it’s more flexible, as you don’t necessarily have to install the number of panels you will need to produce all your energy needs right away. Some people choose grid-tied systems when they know they could only afford a certain number of panels at a given time, so their goal is to lower their electricity bills—but not eliminate them entirely just yet. Over time, you can always add more panels as you find the financial resources to do so.

Cons: In addition to the pros we already cited for the off-grid system, perhaps the most often-cited con of a grid-tied system is that it cannot function when the grid experiences a power outage. Some may erroneously think that if a power outage occurs, their panels will act as a sort of backup generator, but this is not the case since they’re still connected to the greater power grid. Also, as we touched on above, if you live in a particularly rural area it can be very costly to install power lines that connect your system to the grid.

*Editors Note: The Tesla Powerwall is a game changer for solar storage. However, the demand for the battery was so great the Powerwall home system is sold out through mid-2016.