The Southeast may be better known at times for its resistance to solar power than for its embrace of clean energy, but solar is beginning to quickly take hold in the region.

Though most utility-scale solar power is produced in California and Arizona, large solar power installations are catching on quickly in North Carolina and Georgia. There, utility scale solar will have grown from nearly nothing five years ago to more than 3,000 megawatts of solar power capacity by the end of 2016, according to a new Energy Information Administration report. That’s enough to power nearly 500,000 homes. 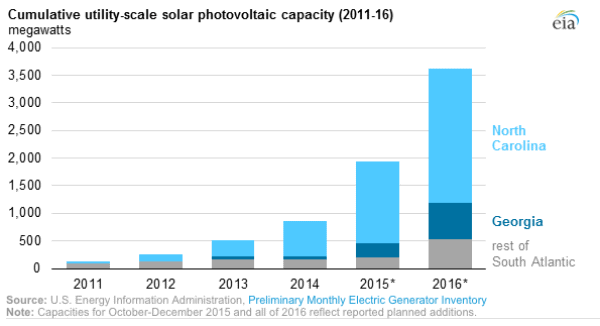 Utility-scale solar power is a major low-carbon energy source that fits into the Obama administration’s Clean Power Plan, which aims to slash emissions from existing coal-fired power plants through 2030 as a way to tackle climate change. The EIA expects utility-scale solar in the U.S. to have grown 123 percent between 2014 and the end of 2016.

Solar development is spreading throughout the Southeast as the costs of solar photovoltaic technology has fallen and some states have issued renewable energy mandates.

North Carolina has required that 12.5 percent of its electricity come from solar and other renewables by 2021. In Georgia, which has no such mandate, utility-scale solar is being driven partly because of the U.S. military presence there, according to the EIA. The state’s largest utility, Georgia Power, struck a deal with the U.S. Department of Defense to install 13 solar farms on military bases in Georgia totaling 607 megawatts by the end of 2016.

The state approved the solar installations because solar panel costs have fallen so much that building new solar farms will not contribute to an increase in electricity rates, according to the EIA.

Until now, utilities in the Southeast had also been rushing to take advantage of a federal tax credit for solar, which had been set to expire at the end of 2016. Two weeks ago, Congress renewed the tax credit for another five years.

Nationally, that extension could mean that solar power generation capacity “will more than triple by 2020, hitting 100 gigawatts,” Rhone Resch, CEO of the Solar Energy Industries Association, said in a statement. “That’s enough to power 20 million homes and represents 3.5 percent of U.S. electricity generation.”