Solar additions to U.S. large-scale generating capacity were up by near 70 percent in the first half of the year over the same period last year, according to data from the U.S. Energy Information Administration (EIA).

A total of 4.35 GW of new large-scale generating capacity has come online during the first six months of the year, the EIA says. Natural gas plants, almost all combined-cycle plants*, made up more than half the additions, while solar panels contributed more than a quarter and wind plants around one-sixth.

Solar additions amounted to 1,146 MW, the EIA says. About three-quarters of this solar capacity was located in California, including the Topaz and Desert Sunlight Phase 1 and 2 photovoltaic plants and the Genesis solar thermal plant. Arizona, Nevada and Massachusetts made up most of the rest.

The EIA utility-scale report does not include solar capacity additions below 1 MW that are typically used in distributed power applications at residential and commercial sites.

Wind additions in the first half of the year amounted to 675 MW as compared with 329 MW added over the same period last year. Most of the additional wind capacity was concentrated in California, Nebraska, Michigan and Minnesota. California’s 228 MW of capacity additions came from the Alta Wind X and Alta Wind XI phases of the Alta Wind Energy Center. 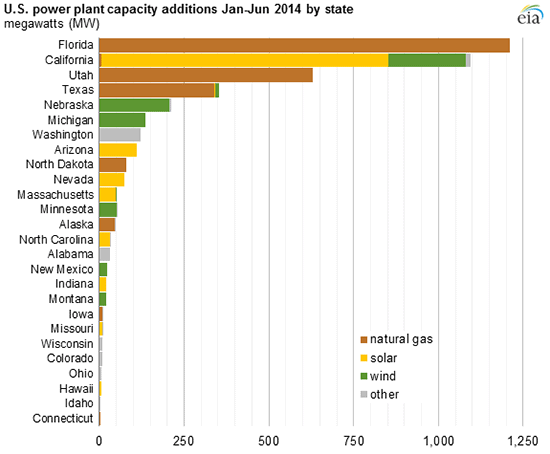 *A combined-cycle power plant uses both a gas and a steam turbine together to produce up to 50 percent more electricity from the same fuel than a traditional simple-cycle plant. The waste heat from the gas turbine is routed to the nearby steam turbine, which generates extra power.