NRG Energy Inc. and MGM Resorts International have completed a 2.1 MW expansion of a massive solar project on the roof of the Mandalay Bay Convention Center in Las Vegas. Combined with a previously installed, 6.2 MW first phase, the expanded solar project now has more than 26,000 photovoltaic panels and produces 8.3 MW of electricity, which the companies are hailing as a new national record for rooftop arrays. At full production, the system supplies 25 percent of the power demand of the entire Mandalay Bay Resort & Casino campus. 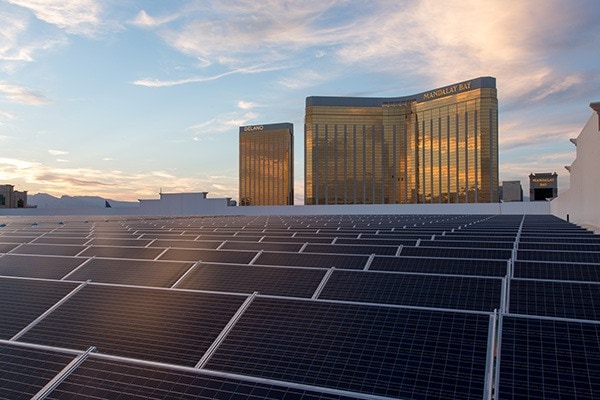 It is projected that the expanded solar installation will displace approximately 8,400 metric tons of carbon dioxide (CO2) annually, the equivalent of taking more than 1,700 automobiles off the road. The electricity produced is also equivalent to the average annual usage of 1,340 U.S. homes. Since completion of the first phase in 2014, the project has helped provide pricing stability for MGM Resorts while reducing the amount of energy drawn from the southern Nevada grid during times of peak electricity demand.

“MGM Resorts International has a long history of integrating environmentally responsible practices throughout our operations to help preserve the planet’s limited resources,” says Cindy Ortega, senior vice president and chief sustainability officer of MGM Resorts International. “Our continued partnership with NRG is a source of pride and inspires our desire to continually implement innovative solutions that promote renewable energy.”

Chuck Bowling, president and chief operating officer of Mandalay Bay Resort & Casino adds, “The expansion of our rooftop solar installation at Mandalay Bay significantly advances our resort’s commitment to being a leading sustainable destination for conferences and conventions. Utilizing energy produced from a renewable resource is a cornerstone of our comprehensive strategy of sustainable operations.” 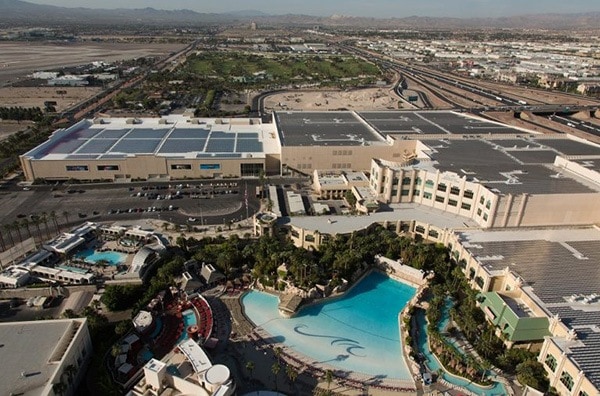 “Companies like MGM Resorts are driving an evolution in America’s energy mix as they seek cleaner sources of power that provide more certainty over energy costs,” comments Craig Cornelius, senior vice president of NRG Energy and head of NRG’s renewables group. “The solar array atop Mandalay Bay is stunning in its scope and functionality, and we’re thrilled to have MGM as a partner.”