Disney and Duke Team Up to Launch New Solar Facility 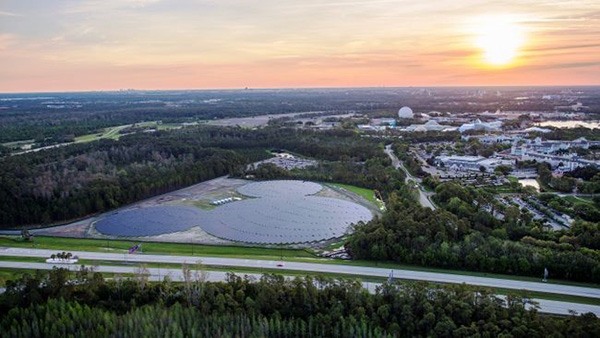 The 5 MW facility is made of 48,000 solar panels and operated by Duke Energy, which will sell the alternative energy to utility RCID to help meet the power needs of Walt Disney World Resort and its other customers, such as Four Seasons Resort and the hoteliers along Hotel Plaza Boulevard.

“We’re committed to providing our customers with greater access to renewable energy, and the Walt Disney World Solar Facility is one example of how we’re doing that,” says Alex Glenn, Duke Energy’s Florida president. “We appreciate this unique opportunity to collaborate with Reedy Creek Improvement District and Walt Disney World Resort to expand the use of solar energy generation in Florida.”

Disney, Duke Energy, and RCID representatives commemorated the opening of the new facility by flipping a giant light switch at an event on Tuesday.

“As a company that cares about the environment, we continually take steps of varying sizes to benefit the environment and protect the planet,” says Angie Renner, environmental integration director for Walt Disney World Resort. “This new solar facility will help us in our efforts to conserve natural resources.”

The new solar facility at Walt Disney World is one of several Florida solar projects Duke Energy is developing. By 2024, Duke Energy plans to add up to 500 MW of additional solar energy in the state.