The Solar Foundation has launched an interactive Solar Jobs Map, which provides data on the number of solar jobs in every U.S. state, metropolitan area, county, and congressional district in 2016. The new map builds on the nonprofit’s recently released National Solar Jobs Census 2016 report and reveals the impact of the nation’s historic solar jobs boom down to the local level.

In addition to the map, The Solar Foundation has produced 50 state-level fact sheets and released an analysis of the economic impact of the solar labor market nationwide and in five states: California, Florida, New York, Ohio and Texas.

As previously reported, The Solar Jobs Census 2016 found that solar industry employment increased by a historic 25 percent nationwide from 2015 to 2016, for a total of 260,077 solar workers. This growth occurred across all regions of the country – the number of solar jobs increased in 44 of the 50 states from 2015 to 2016. In 21 of the 50 states, solar jobs grew by 50 percent or more.

The top 25 metropolitan areas based on the total number of solar workers are listed below, along with the percentage increase or decrease from 2015. 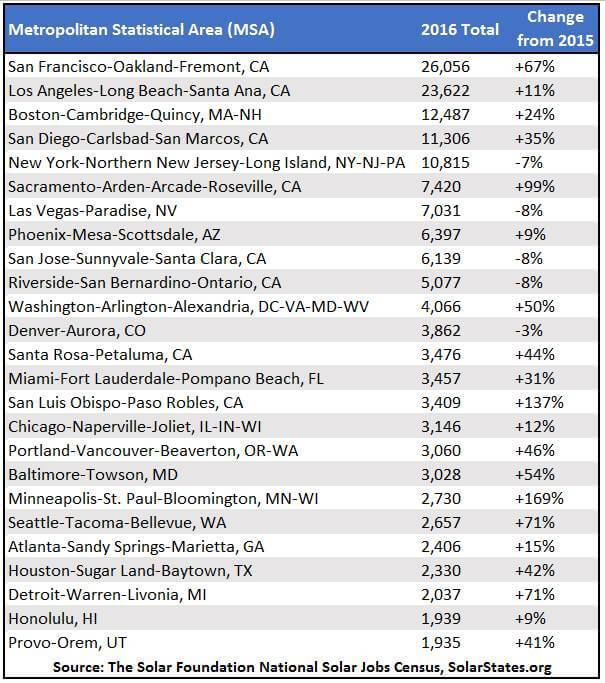 “The solar industry is generating well-paying jobs everywhere from Detroit to Miami to Salt Lake City, and in states from Ohio to Texas to South Carolina,” says Andrea Luecke, president and executive director of The Solar Foundation. “America’s solar energy boom adds tens of billions of dollars to our economy each year, all while providing an affordable, reliable, and local energy source.”

In 2016, The Solar Foundation found that with 260,077 solar workers nationwide, the solar industry produced $62.5 billion in direct sales. The solar industry’s broader labor impact that includes direct, indirect, and induced jobs amounted to nearly 789,000 U.S. jobs. The nonprofit says these jobs paid more than $50 billion in salaries, wages, and benefits and produced $154 billion in total economic activity for the U.S. in 2016.

“Solar power not only enhances environmental protection and health – it helps accelerate economic growth,” comments Colorado Gov. John Hickenlooper. “We are pleased that the solar industry continues to find Colorado a good state for business. For years, Colorado has been on the leading edge of clean energy and solar deployment. Thanks to Coloradans’ vision, initiative, and leadership, we’ve grown our solar workforce by 20 percent in 2016 – and are among the top states in solar deployment, setting a great example for the entire nation.”

“As a Solar America City and a SolSmart Gold city, we’ve worked to make it easier and more affordable to install solar,” says Milwaukee Mayor Tom Barrett. “As a result, we have seen tremendous growth of solar job opportunities in Milwaukee and hope to see continued growth in these sustainable jobs. These jobs are important to our local economy and help us reach many of the goals in our city’s sustainability plan.”

Detailed information on solar jobs at the national level can be found in the full report for the National Solar Jobs Census 2016, available at SolarJobsCensus.org. Since 2010, The Solar Foundation’s census study has defined solar workers as those who spend at least 50% of their time on solar-related work, but the nonprofit notes it has consistently found that approximately 90 percent of these workers spend 100 percent of their time on solar-related work. The Solar Jobs Census 2016 was part of the U.S. Department of Energy’s U.S. Energy and Employment Report data collection effort.

The Solar Foundation says its new Solar Jobs Map provides complete data on solar jobs in all 50 states, along with details on jobs by solar employment sector, percentages of women and veterans in the solar workforce, and more. Users can toggle between 2015 and 2016 data to compare the number of solar jobs year-over-year. The Solar Jobs Map, as well as state-based fact sheets, can be found at SolarStates.org.